Muslims will show how Trump plays the fool says Yapıcıoğlu 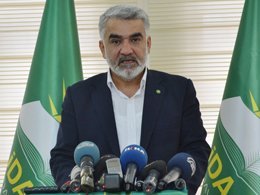 “God willing, Muslims will show how he (Trump) plays a fool,” said HUDA PAR Chairman Yapıcıoğlu regarding the imperialist US decision for Jerusalem.

On his twitter account, HUDA PAR President Zekeriya Yapıcıoğlu reacted the evil plan of the imperialist US’ President Trump that announced Jerusalem as the capital of israel and ordered to move the embassy to Jerusalem.

Yapıcıoğlu shares the following message: "I do not think Trump has the capacity to understand how a door he opened. But God willing, Muslims will show how he plays a fool, with a language even he can understand.  Then, even zionists will curse Trump. (ILKHA)