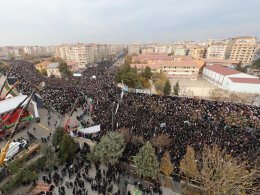 In response to US President Trump's decision to recognize Jerusalem as the so-called "capital" of zionists, hundreds of thousands cursed israel and the US in the rally held by HUDA PAR for Jerusalem at Diyarbakır Station Square.

Reactions continue against the evil plan of the imperialist US President Trump's decision recognized the very first Kiblah of Muslims Jerusalem as the capital of the zionist occupation.

Palestinian flags were hung in the field of "We stand with Al-Quds" rally. Banners were carried by people reading as: "O Islamic Countries! Cut all military, political and commercial ties with the zionist occupier gangs." "O, Saladin! We stand with your cause", "If there is unity, zionists and the US will be depressed." "We stand with Al-Quds." "Tell the israelis, we are the Ummah of Prophet Muhammad and we are back and we gain ground on the road to Al-Quds." "Lailaheillallah Muhammad Rasulullah." "The freedom of Al-Quds is the unity of the Ummah." "Jerusalem is the capital of Palestine."

In the "We stand with Al-Quds" rally, which is attended by hundreds of thousands of people, was a scene of great enthusiasm and emotional moments. The program which was hosted by of the Martyrs Caravan Platform Chairman Ömer Çelik started at 13.00 hours with Sheikh Munir's Qur'an recitation.

"There is no other option but unity"

HUDA PAR President Yapıcıoğlu addressed hundreds of thousands in the "We stand with Al-Quds" rally held in Diyarbakır to protest the Jerusalem decision of the United States and said that there is no other option of the Ummah than unity.

Zekeriya Yapıcıoğlu reminded that Jerusalem is the first kiblah of the Muslims, said: "Al-Quds, which is the very first kiblah of Muslims, the second masjid constructed on the earth and the third harem of Islam after Mecca and Medina. We send greeting from Diyarbakır, from the fifth Haram al-Sharif of Islam. Al-Quds [Jerusalem] was conquered 1381 years ago by Islam armies during the Omar era. In addition, we send greeting to Al-Quds from Diyarbakır where conquered 3 years later during the Omar era. Salute our brothers, who are on guard in Jerusalem, in blessed site. Salute our 3 thousand brothers who have been injured after the evil decision of the president of the US."

Saying that he is addressing to the whole world in the presence of grandchildren of Saladin, who liberated Al-Quds after 88 years remained under the siege of crusaders, Yapıcıoğlu continued: "Here I am calling every friend and enemy as the grandchildren of Saladin, the victor of Al-Quds. After the second conquest, Jerusalem was occupied by the British 100 years ago in 1917 and polluted. Palestinian lands were occupied. Just fifty years later in 1967, the east of Jerusalem was occupied by zionists. That day, the zionists declared Jerusalem an indivisible and eternal capital. By Allah's permission, they have never been able to carry it out and the will never because of the resistance of the blessed sons of Ummah."

"The capital of Palestine is Jerusalem as a whole"

Referring to the meeting of the OIC, Yapıcıoğlu continued: "IIT received an extraordinary meeting decision for this reason. On Wednesday, on the day of the meeting, the coalition countries, made up of some Islamic countries, were bombing another Islamic country, Yemen. If you cannot help your brothers who are starving in East Guta, if you only watch the tiny bodies of babies due to starving in Yemen, you cannot do anything for Jerusalem. This is not because of their power; this is because of our disunity.  OIC has gathered on Wednesday. Some decisions have been taken. Of course, some of them were affirmative. They made calls to the whole world for Palestine to be recognized as a state, which is the capital city of East Jerusalem. They were called to the UN. They say; 'If the UNSC does not do it, we are ready to call the Security Council. We see this decision taken by the US as illegitimate.' These are positive developments. Of course, the gathering of the OIC on the Jerusalem agenda is positive in itself. The decisions that come out of it say that 'the capital is Palestine, which is Jerusalem', but in the texts, it says that the capital in East Jerusalem. We say: The capital of Palestine is not East Jerusalem, it is entirely Jerusalem."

"If we want the US to be damned we should be united," said Yapıcıoğlu and added: "Let's be the one fist that zionism is overthrown."

Talking about what needs to be done for the Ummah, Yapıcıoğlu continued his speech as follows:

I am calling the administrators who run Islamic countries!

•           To those who rule Islamic countries! Give up recognizing the zionist terror network as a state. If there is, so, cut off all your commercials, military, everything ties with the zionists terror network.

•           Immediately deport the diplomatic guy zionists if you have in your country. If there is, immediately withdraw your ambassadors, consuls whom you sent to represent the country beside the zionists.

•           O the heads of the Islamic countries! Close all airplanes in this green-painted map to all the airplanes that will arrive or depart the airports of the occupation of the zionists.

•           In your own countries, change your laws. Describe terrorism. Write in your laws that zionism is the most dangerous terrorist organization. They should not step on your land and pollute it.

•           Solve your own problems based on justice and take the Islamic union to the agenda.

So what are we going to do? We demand this from the managers. We are people, Ummah. We demand this on behalf of the people. We call to the Muslim peoples, the Islamic Ummah. We are addressing their NGOs, political parties:

To be angry and shouting is not just the remedy. Therefore, we must seek remedies to change the current situation. We should take this to the top of the agenda. Show your projects. Be hopeful and sincere. Youth! Read a lot. Get ready for mind and soul. Believe yourself before that the zionists, who are not even one percent, are temporary there.

The Crusaders occupied Jerusalem for 88 years. This occupation lasted 100 years. Is this not enough? Saladin visited Diyarbakır 5 years ago before conquering Jerusalem. Women in Diyarbekir told Saladin that they have a gift that should be delivered to its place. They said that they prepared rose water and rose oil for Al-Aqsa to be washed with after it gets its liberation. Saladin took that rose water and oil. He then washed Masjid Al-Aqsa with them rose water and oil after 5 years he conquered Al-Quds.

My last words are to my sisters. Raise rose in your garden. Grow up roses. I hope the freedom of Jerusalem is approaching. I hope that we will wash Jerusalem again with that rose water.

"Jerusalem is the homeland of the Prophets"

Addressing to "We stand with Al-Quds" rally, Mullah Osman Teyfur pointed out that Muslims should always struggle for the protection of Jerusalem, "Jerusalem is the homeland of the prophets. Jerusalem is the center of good things. The place of Tawhid, the muvahhids. The prophets and their successors have always taken possession of Jerusalem; they have protected it, and have sacrificed themselves for this cause."

Reminding that Jerusalem occupied by the Mongols, Teyfur stated that the disunity of Muslims prepared Jerusalem's occupation ground.

"If we repent and return to our religion, we will walk once again in this way and the Masjid al-Aqsa will be free. When Jerusalem fell into the hands of the crusaders, Saladin wrote a letter to the crusaders said; you invaded Jerusalem because of our disunity. There is no comfort for you as long as Muslims live on these lands.

"Jerusalem is waiting for the grandsons of Saladin"

El Rifai, who said that the decision taken by US President Trump was a war declaration for Muslims, said, "This attitude is a war affair to Muslims' sacredness and humanity."

"Jerusalem Islam is our land and our red line"

Hamas Spokesman Sami Abu Zuhri, who came to the platform, conveyed the salute of HAMAS leader İsmail Haniya to the crowd, said:

"Today we are saying from here to the whole world. Jerusalem is Islamic land, not Americans. Jerusalem belongs to the grandchildren of Saladin. Jerusalem is our red line. We tell America; cut off your ties with israil and apologize to the Ummah. Jerusalem is a territory of our religion. That is why we say: Trump had a big crime. Muslims will never forgive him. When we hear these slogans from Diyarbakır, we believe and understand; Saladin's grandchildren will have and will exist." (M. Hüseyin Temel, Abdurrahman Tetik, Emrah Deniz - ILKHA)