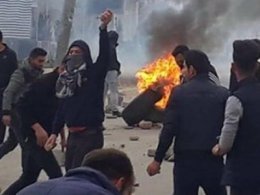 Five lost their lives and 93 other people reportedly were injured in the protests last for two days in Iraqi Kurdistan.

Up to now, five people have lost their lives and 93 other people were injured in the demonstrations that started yesterday in Sulaimani city of Iraqi Kurdistan.

In the demonstrations of Sulaimani's Ranya district, 70 people were wounded including 36 security guards.

In Sulaimani of Iraqi Kurdistan, where the opposition parties Goran Movement and the Kurdistan Patriotic Union are strong, some of the teachers launched demonstrations for their late salaries were soon turned into mass demonstrations.

The demonstrations that began in the city center of Sulaimani later spread to many towns. No protests were held in Arbil and Duhok, where the KDP [Kurdistan Democratic Party] is strong.

In Iraqi Kurdistan, there are approximately 1.4 million civil servants who receive salaries from the government.

The wages of the officers were paid intermittently from the daily income of oil exported. The Arbil administration has lost half of its oil revenues by giving full control of Kirkuk province to the joint forces of the Iraqi central government. (ILKHA)