'Those who turn their backs on Al-Quds cannot claim Haramain' 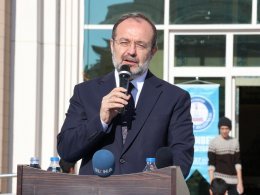 Former President of Diyanet Prof. Mehmet Görmez participated in the opening ceremony of the imam-hatip middle school. Speaking at the opening, Görmez said that those who turn their back on Al-Quds cannot claim Haramain.

Beginning his speech with the wish of the freedom for Masjid Al-Aqsa, which is under the zionist occupation, Görmez said: